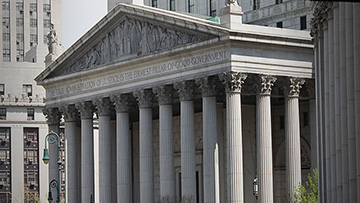 At Bloomberg, Steinberg and Bader we enjoy a longstanding history of success in courtrooms in New York and New Jersey, having obtained multi-million dollars in verdicts and settlements for our clients. Our firm is committed to providing caring, professional and experienced representation in order to secure the maximum possible recovery in the most efficient and professionally responsible manner. Here are some of our most recent verdicts and settlements:

Negligence in Administering Anesthesia – $3,375,000.00
A physician was negligently treated for pneumonia which forced him to undergo surgery. During surgery the anesthesiologist was negligent in administering and monitoring the levels of anesthesia, causing our client to sustain brain damage.

Failure to Diagnose Stroke – $3,270,000.00
In this case, the physician misdiagnosed an impending stroke. Instead of immediately hospitalizing our client, he prescribed medication for migraine headaches which only caused the progression of the stroke and aggravated our client’s injuries.

Failure to Diagnose Post Birth Complications – $2,280,000.00
Despite our client’s history of pre-term miscarriages, the hospital failed to admit her when she showed signs and symptoms of pre-term labor. As a result, our client gave birth at 29 weeks, and her daughter suffered brain injuries related to prematurity.

Failure to Diagnose Pre-Natal Infection – $2,250,000.00
The hospital physicians failed to treat our client’s infection which led to onset of pre-term labor. When she presented at the hospital in labor, she was inappropriately monitored, which caused a delay in diagnosing fetal distress and the performance of a timely C-Section. As a result, her baby suffered brain damage.

Failure to Diagnose Stroke – $2,250,000.00
In this case, our client woke up in the morning with signs and symptoms related to stroke. His wife immediately took him to the hospital, but the hospital physicians delayed in making the correct diagnosis, causing an aggravation of our client’s injuries.

Failure to Diagnose Fetal Distress – $1,500,000.00
Despite the fact that fetal heart monitoring showed signs of fetal distress, the hospital physicians delayed in ordering a Cesarian Section. As a result, our client’s daughter suffered brain damage.

Failure to Diagnose Deep Vein Thrombosis – $1,250,000.00
In this case our client’s husband went the hospital emergency room complaining of severe leg pain. Despite exhibiting signs and symptoms of a life threatening deep vein thrombosis, the hospital left him waiting for treatment for hours. By the time the physicians diagnosed the problem, it was too late and our client’s husband died.

Failure to Diagnose Fallopian Tube cancer – $1,000,000.00
In this case, In April, 2005, our client’s wife complained of irregular menses and spotting for 4 months. Pelvic and abdominal ultrasounds were reported as normal, but couldn’t be found after the lawsuit started. The delay in diagnosis caused the death of our client’s wife from a rare form of fallopian tube cancer.

Infant Sustains Scalding injuries from hot water – $4,150,000.00
In this case an infant was scalded by hot water temperatures that ranged between 151̊F and 186̊F. After considerable investigation it was found that the building’s domestic hot water system was not equipped with a temperature relief valve that would have maintained the hot water temperature at reasonable levels.

Infant Sustains Scalding injuries during bath – $2,965,000.00
This was a structured settlement for an infant who sustained scalding injuries while taking a bath. Hot water temperatures were found to range between 164̊F and 173̊F, and the shower valve in the bathtub was installed improperly, causing it to open from hot to cold water.

Pedestrian Sustains Head Injuries – $2,175,000.00
While working at a gas station, our client was struck by a car that was backing up toward the gas pumps. As a result, our client sustained severe skull and facial fractures.

Injuries Sustained due to Faulty Brake Repair – $1,580,000.00
Our client was a passenger in a motor vehicle, when the driver lost control and drove off the road and into a tree, causing our client to sustain severe injuries. After extensive investigation, we found that the accident was caused by a faulty brake repair.

Pedestrian Struck by Bus – $900,000.00
Our client sustained severe leg injuries when a bus, while backing out of a parking space, pinned his legs between the rear of the bus and a parked car.

Passenger Sustains Emotional Injuries – $700,000.00
Our client sustained severe emotional injuries as a result of being involved in a motor vehicle accident.

Worker Loses Fingers in a Defective Plastics Machine – $1,325,000.00
In this case our client’s hand was crushed by the press of a plastics machine. We contended that the machine manufacturer was negligent in failing to incorporate an automatic guiding system in the machine, that would not require the operator to place his hands in the machine’s danger zone.

Worker’s Hand is Crushed in a Defective Plastics Machine – $1,200,000.00
In this case our client’s hand was crushed by the press of a plastics machine after he opened the machine’s access gate to remove a piece of plastic that became stuck in the press. We contended that the machine was defective because it failed to incorporate an interlocking mechanism that would make the machine non-operational when the access door was opened.

Man drowns in Pool at Resort Hotel – $1,250,000.00
Our client’s husband was found dead in the swimming pool at a resort hotel. After extensive investigation, including analysis of the coroner’s report, we found that the death could have been avoided if a life line was placed at the point in the pool that divided the shallow and deep ends.

Infant Exposed to Lead Paint Dust in Home – $1,000,000.00
In this case, our clients complained to their landlord, on multiple occasions, about peeling paint and paint dust in their apartment. After their infant son was diagnosed with lead poisoning we determined that the apartment was painted with lead based paint, and the landlord failed to take steps to remove this dangerous condition despite knowing that there was a young child living in the apartment.

Child Fractures Arm on Defective Air Bounce – $600,000.00
Our client’s son was injured while jumping on an air bounce at a children’s play center. Our investigation revealed that the air bounce was not sufficiently inflated.

Please complete our comprehensive case form so that we may get back to you as effectively as possible. Thank you.